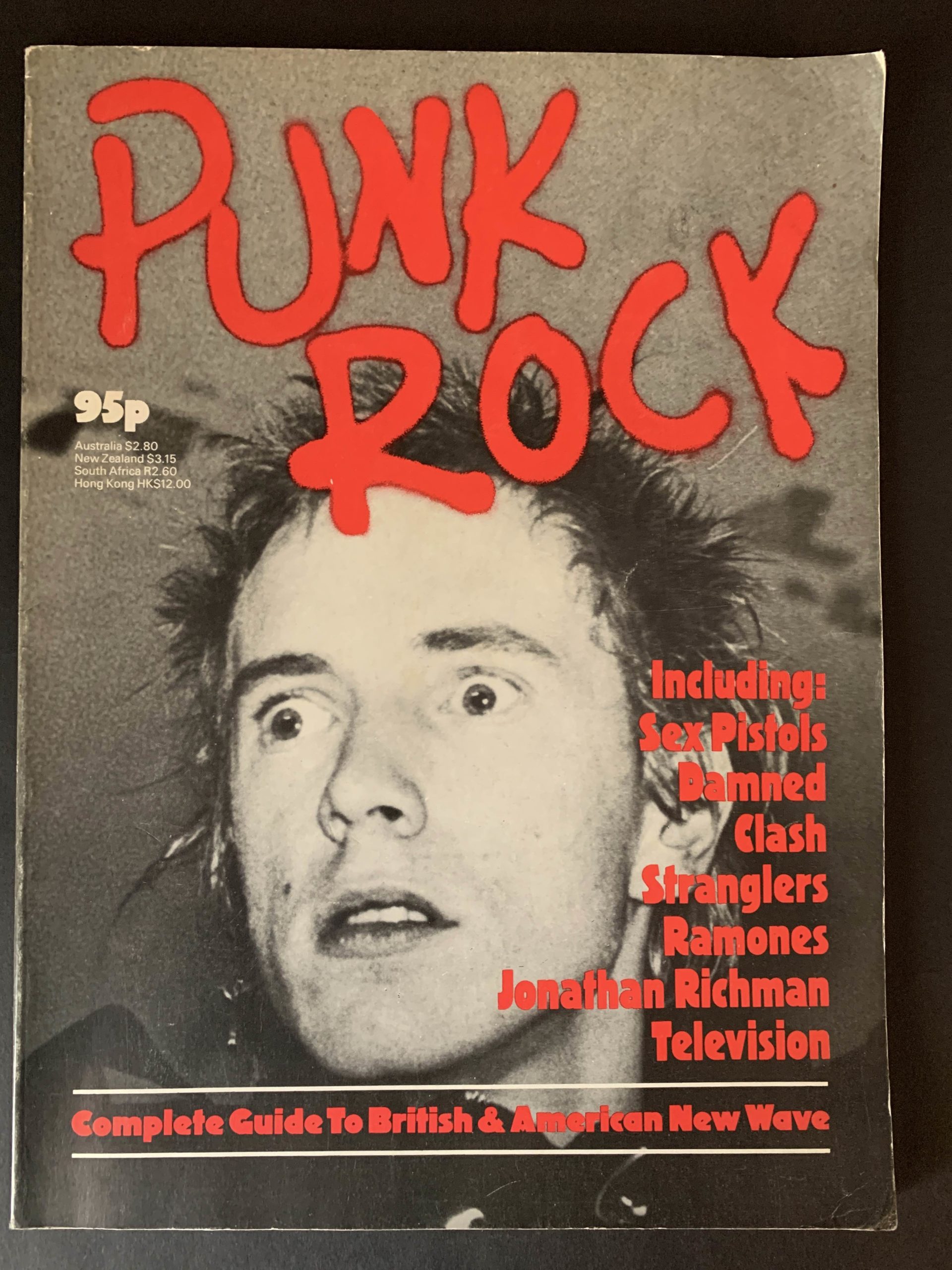 In the wake of the tidal wave of media attention that crashed down on the emergent punk scene, there followed a slew of books on the subject. These ranged from cheap cash-ins  to valuable documentation of the era. Compare, In the Gutter with 100 Nights at the Roxy. The first published (as a sociology title) was a light-hearted comparison between punk fashion and ethnic tribal attire an the latter, a genuine portrayal of bands and audience in action – at the ground zero of the London club scene. Both are now interesting documents of the vibrant cross-cultural upheaval, that depict a new music scene and its relationship to a fashion revolution. Overnight sartorial etiquette was torn up and spat upon, while conceited mid-seventies A.O.R rock, sounded ridiculous against the sparse, guttural agitprop of punk’s D.I.Y sound.

However, punk rock wasn’t exactly a new sound, if anything, the crude bastard son of 1950s’ Rock ’N’ Roll with added posture and extra attitude.  By the late 1950s, it seemed that a full-scale youth culture revolution had been thwarted, as sanitized teen crooners replaced Rock ’N’ Roll’s key players. Elvis was packed off to the army, Little Richard enrolled in the priesthood, Chuck Berry was jailed,  Jerry Lee Lewis disgraced, while Buddy Holly, Eddie Cochran and Gene Vincent met untimely deaths. However, there was an even greater  reawakening when the mid-sixties counter-culture movement challenged all public morals…But the worldwide revolution of ’68 wasn’t deliver as envisaged and as life began to return to normal the hippie dream was assimilated into bubblegum and glam-rock for the kiddies. When punk raised its ugly head a decade later, the mainstream media fed the uprising with its moral outrage and headline disapproval.  Effectively the youth culture discourse which began with Rock ’N’ Roll in the fifties, reached a kaleidoscopic peak in the mid-sixties and reached a suicide point with punk, had gone full circle.

However, Punk’s ‘back-to-basics’ sound was facilitated by a trend that began at the end of the sixties (MC5’s Back in the USA, The Beatles Get Back project,  Toronto Rock ’N’ Roll Revival festival).  In August 1972  there was the massive London Rock and Roll Show staged at Wembley Stadium. In the film of the event future Pistols’ manager Malcolm McLaren is seen on his Let It Rock stall flogging R’n’R lives T-shirts, whilst sporting a fetching leopard print cap. He’d been selling old records and 1950s Teddy Boy dead stock from the backroom of 430 King’s Road, which he eventually managed to take over completely as Let It Rock. Throughout 1973 the Rock ’N’ Roll revival grew increasingly commercial with cover bands such as Showaddywaddy winning ITV’s New Faces  talent show, the West End stage production of Grease and the cinema release of American Graffiti.  McLaren refurbished the business and changed the name to Too Fast to Live, Too Young to Die in an attempt to distance himself from the sugar coated nostalgic aspects of the rival whilst having to contend with bouts of old school  Teddy Boy violence in the shop. As his girlfriend, Vivienne Westwood, who’d designed and made clothes, became increasingly involved in the business it was renamed  SEX in 1974 and then Seditionaries throughout the punk era, 1976-1980. 430 was where the Sex Pistols formed and UK punk began. The close association to the shop  led to the often raised question: were the Sex Pistols, akin to the Monkees, a manufactured band, a product of McLaren’s ex-art school Situationist informed management style and worse still, clothes hangers for Westwood’s pretensions as a fashion designer?

Bollocks was the answer. The Pistols’ sole LP, Never Mind the Bollocks, was not only the defining record of punk era but also ranks amongst Britain’s most important cultural exports. As the band collapsed, McLaren perpetuated his charade that everything was his ploy, with the 1980 film The Great Rock ’n’ Swindle.

Around the corner from 430, was the Man in the Moon pub where another key punk band X-Ray Spex, fronted by Marion Elliot-Said aka Poly Styrene, performed their first show in 1976. Their classic song I’m A Poseur (and I don’t care) summed up the period perfectly. While hippie hating and denouncing everything that had gone previously was pure punk, the ‘live for the moment’ philosophy was a continuation of sixties counter culture. As was parading along the King’s Road at the weekend, decked their finest attempts at anarchic anti-fashion  to turn heads and meet with disapproval.  To further the “hippy hating” irony, 430 was home to two of Swinging London’s hippest boutiques Hung on You, then Mr Freedom (check out Get Dressed pub.1966 and Gear Guide pub.1967 –both swinging London boutique gazetteers).

Posing was a large part of punk and right up until the mid-eighties the King’s Road was a street photographer’s paradise. Punks were as guilty as any trend by adhering to narrow dress code , effectively conforming in their unconformity. The King’s Road at the weekend was a truly amazing sight, and typically punk became than another London tourist attraction, with many punks posing for tourist photos …for cash.

Many punk books filled their pages with photographs of street/club fashion mixed with what was happened in the clubs. Again, the best had a cross section of band and audience. While mainstream music press might have focused on the male bands at the time, nowadays the emphasis has shifted towards the ladies of punk :  The Slits, Siouxsie Sioux, Poly Styrene, Patti Smith, Gail Advert etc….not to forget transgender : Wayne/Jayne County… Punk had it all. Let’s not forget that the lengendery Bat Cave Club had a male, female and “other” toilet back in 1980, gender politics was very much a thing of the past too.

Often the books printed during the period were just as badly made as the clothes, they literally fell apart…Also, it wasn’t in the  spirit of punk to keep something in  perfect condition….all making these book  rare collector’s items.

POPT’S TOP 10 of early Punk books…click on links below to take you to the individual titles.