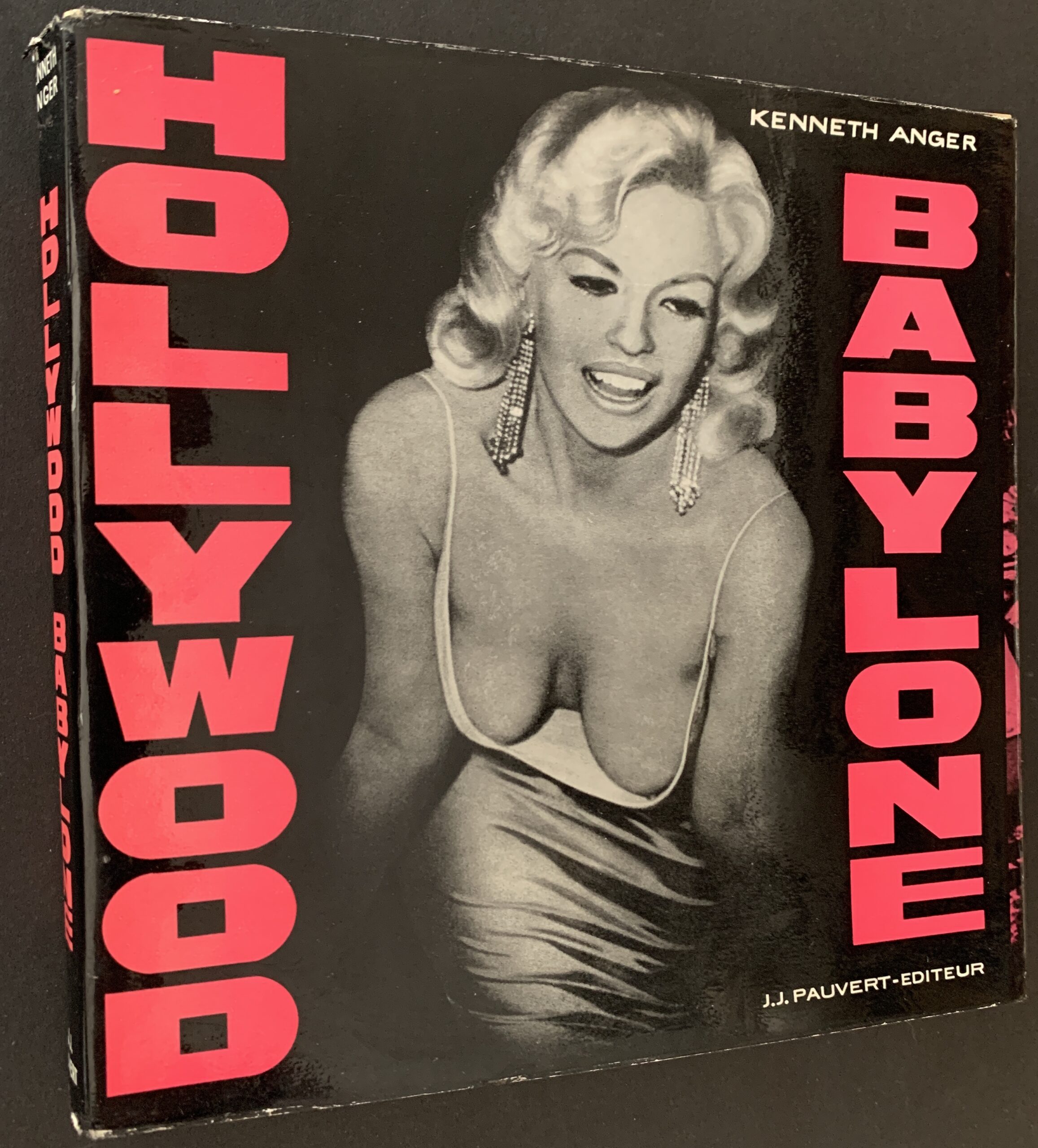 Kenneth Anger’s book Hollywood Babylon has never ceased to be a source of controversy and outrage ever since it was made publicly available in 1975 by Rolling Stone’s printers Straight Arrow.

What is less known is the infamous work began life as a 1957 magazine article printed in France, followed in 1959 by a book, again only published in French. An English language edition didn’t appear until 1965. This was a cheap news stand style paperback, that was banned allegedly within 10 days of publication and thereafter was sold in a brown paper bag.

While much of  the book’s  contents has been routinely refuted over the last 60 years, it still remains a fascinating and  titillating snapshot of bitchy gossip, hearsay and urban legend from Tinsel town’s golden era. The title, in Anger’s typically Crowley-esque style, attempts to parallel the detailed intrigue of Hollywood’s  bygone Golden Era of the 1920-1930’s with the lost civilisation of Babylon.

Ironically even Anger’s own claim (in the book) to have been a child prodigy has come under scrutiny. Supposedly Warner Bros Studio archives document that a girl called Sheila Brown played the role of the Changeling Prince in the 1935 film adaption of Shakespeare’s Midsummer’s Night Dream and  NOT a seven year old Kenneth Anger !  However, the publicity photos of the character astride a small white pony certainly look like a young Anger. Truth be damned, who said “fake” news was anything new?

Regardless of Anger’s debatable start in the movie world, he experienced scandal  first hand in 1947 when he was prosecuted for pornography for his silent short, Fireworks.  In the film, Anger portrays a young man who awakens, and as he dresses in front of  a mirror above an open fireplace, he discards a handful of photos depicting a sailor holding a limp figure into the flames. When the protagonist enters an adjacent room, crudely marked GENTS,  he is attacked  by a gang of sailors. At the end of the film when the protagonist returns to the bed,  Anger’s theme of Lucifer, the ‘light bearer’, first manifests on celluloid.…Lacking any special effects capability, he hand painted a representation of Lucifer as a flash of light directly onto the film stock.

The surreal dream time slip may have been influenced by  Maya Deren’s 1943 Meshes of the Afternoon – one of Anger’s known inspirations. Luckily the presiding judge dismissed the charges on the grounds that, “homosexuality is older than Sodom and Gomorrah”.

Shortly afterwards, Anger ventured to Paris to investigate the avant-garde film scene. According to an article in the Guardian in 2013 Anger states, “I’d taken pictures of Black Saturday, the anti-British riots in Cairo in 1952. When they burned down Shephard Hotel, I filmed people jumping from the windows and being massacred in the street – they had their legs cut off by swords and were left to bleed to death because they were British. I sold those images to Picture Post, which paid for my trip.” While there, he worked with Henri Langlois and Marcel Marceau’s mime troupe on a short film titled Rabbit’s Moon (not completed until 1972) and later shot other films including Les Chants de Maldoror, Le Jeune Homme et la Mort (based on Jean Cocteau’s ballet) and Eaux d’artifice in the Garden of the Villa D’Este in Tivoli, Italy.

Back in the USA and broke after his trip to Europe, he began to work as both a translator and  “insider’ gossip  columnist  reporting from Hollywood -hence the original 1957 Hollywood Babylone article in Cahiers Du Cinema magazine. 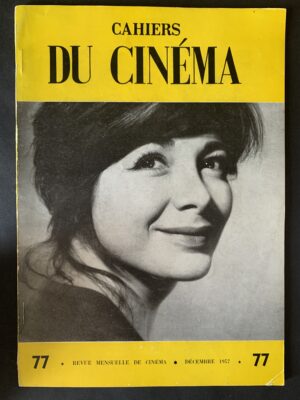 Given the different editions vary  so drastically in terms of size,  format. layout, not

to mention language,  trying to correlate the contents is near impossible -each edition is different. Even the photo selections aren’t consistent.

The first English language edition was printed in 1965 in the USA by the infamous Marvin Miller  (a.k.a King of Smut.”  He also ran Green leaf Press, a copycat of the Olympic Press – who printed English Language titles in Paris , that would  otherwise be banned in their country of origin. Believe it or not – you could be busted by customs for bringing these highly prized ‘not for sale in the UK or USA’ titles such as Naked Lunch into the country…. John Dunbar (Indica Bookshop & Gallery) even recalls having  copies of Naked Lunch confiscated at British  in 1968 – after it had been legally published in the UK !

Anger claims that not only did Miller bootleg  Hollywood Babylon but he also wrote the last third himself.  However, Bill Landis’ in his 1995 Unauthorized Biography of Anger, doubts this as it seems,  “curiously similar to Anger’s writing style”.  Landis also notes it was sold in brown paper bags and despite selling an estimated 70% of the 2,00,000 print run in the sixties is “an obscure catch today,  a copy can fetch up to $100’ (in 1995)”.  In 1966 Miller also pirated Luca’s History of Eroticism ( translated from French by Anger) another title published by J.J Pauvert ( pub the original Hollywood Babylone).  Unable to pay the legally expenses to stop Miller, Anger presumably issued a one of his famous curses.  In 1968 Miller was indeed convicted for obscenity  for mailing advertisements for four items – Intercourse, Man–Woman, Sex Orgies Illustrated, An Illustrated History of Pornography and a film entitled Marital Intercourse). 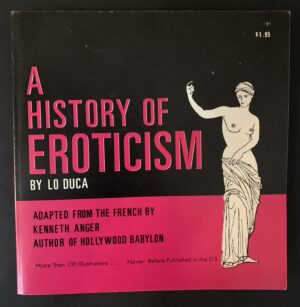 The 1965 Associated Professional Services Hollywood Babylon  haven’t survived well and are now scarce in better than acceptable condition. The  bright red spine , like it’s French  predecessor   is prone to fading and is often a mere shade of pink… The spine is also brittle and likely to crack, I’ve opened a copy that split in half.  If invest in a copy , handle with care !

A legit English language edition of wouldn’t be widely circulated until 1975, when Rolling Stone Magazines’ Straight Arrow Press finally published it. Due to the infamy & cult success of the first volume, a second was published in 1984.

A third volume has long been threatened – but as Anger himself explained at the Q&A after his screenings at the ICA in 2013,  lawsuits would be quick to follow from Tom Cruise and the Church of Scientology.

Click on the links below for POPT Stock at the time of writing but search for Kenneth Anger for all stock items.